Check If Directory Exists In Linux With Bash 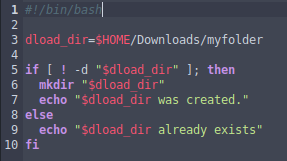 Lets start off with a simple example. You can copy all examples in this tutorial to a file and run the file yourself in a terminal to test for yourself.

Check if a directory exists:

Lets break down the sample above:

When you run the code above it will output the directory “exists” and “does not exist” if it doesn’t.

We will now do the opposite and check if the directory does not exist.

Check if a directory does not exists:

The sample above is nearly the same, but we add a “!” symbol and swap the two echo commands. The “!” symbol tells the test command to instead check if the directory does not exist.

Now that we’ve covered the basics to checking for a directory, lets get a little more advanced.

Check if a directory exists and if not, then create it:

In the code above we use the “mkdir” command to create a new directory.

Check if a directory is empty:

In the sample above we use the list “ls” command with the “-A” flag which tells ls to list all files and directories including the hidden ones in the Downloads directory. If files or directories are found, it lets you know the directory is not empty.

Pass any directory to a bash script:

Copy the code above to a file and name the file “file.sh” then give the file execute permissions.

Now to use the script you just created, you pass it the directory you wish to check. Like this:

If you noticed, the variable has changed to “$1”. This allows the script to take one argument which would be the directory you pass to it.

You can use this script to check if any directory is empty by simply passing the directory to the script as demonstrated.

This brings the tutorial to an end. This was a quick look at how to do checks on directories in linux with bash.