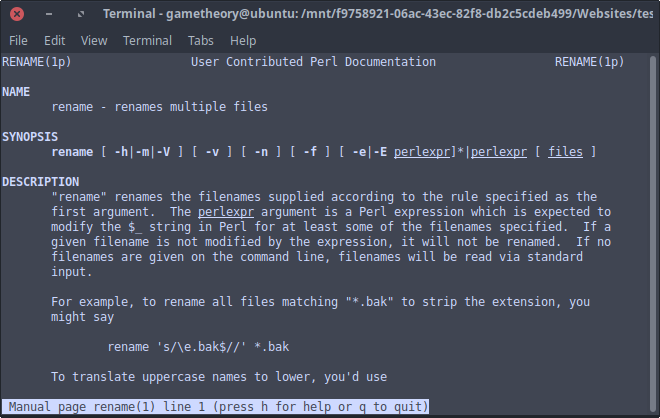 Lets take a look at how to rename files and folders in linux from the command line.

Sure you can use your GUI and be done with it, but learning to do it from the command line can be quite useful. There’s also the added benefit of being able to use these commands in bash scripts.

In a bash script you can loop through lots of files or folders to rename them quickly and efficiently. Knowing the right commands for the job is key.

We will be going over three different methods to rename files and folders:

Renaming a single file with mv:

First lets create some files for testing in an empty folder.

You should now have the following files in your folder:

Now lets run the mv command in a for loop to rename the files and replace the “.bak” extension with “.txt“:

The files should now be renamed as follows:

Now we shall use the rename command. If you don’t have rename installed you can install it as follows:

If you’ve been following this tutorial so far then you should have 4 “.txt” files in your folder which we will be working with.

Lets run the following command to rename the files and replace the “.txt” extension with “.bak“:

The files should now be renamed as follows:

Renaming a single folder with mv:

You should now have the following folders in your directory:

This should be your result:

This was a quick look at how to rename files and folders in linux from the command line. While the mv command would do just fine, the rename command proves to be more efficient and versatile for renaming files and folders.